All right, the Barabarian! The Nord and the Orc seem logical choices for the Barbarian class, if not cliché.
In my first Barbarian Guide I suggested an Argonian and while I still like that option, we've already done an Argonian character in The Shadowscale Assassin a couple of weeks ago.
So we're going with the Nord Barbarian, think Conan meets Skaal.

By now, you should have a fairly good idea of the face replacers we have out there and the ones that appear to you the most.
If you want a change and a blast from the past, you can always use THE Facepack compilation. The author has compiled every face and hairstyles released until 2008 and merged them. On the plus side, you'll see faces you have never seen before, or haven't seen in a very long time. The down side is that a few faces are a bit ages for today's standards. However, I appreciate that each face and hair was chosen very carefully for each npc.
As for Birthsigns, the Warrior is a fine choice, though, the Lord also has its place, especially with a Nord, making you highly resistant to frost but very vulnerable to fire, making combat and survival with Ashfall more unique.
Alternatively, you can use The Definitive Birthsigns Pack and Pluto's Patch for it. Pick the Icicle. 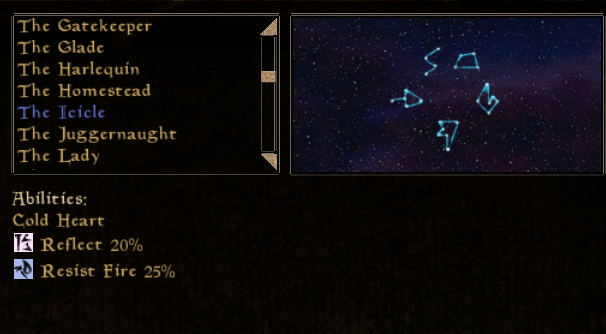 With Merlord's Character Background I'd say have fun with it, embrace your inner (shirtless) Conan and pick the Bodybuilder: as long as you are topless, you have +10 personality. Easy when you don't fear the cold. Of course the bully for extra strength or large frame for extra size also work, they're just less fun. 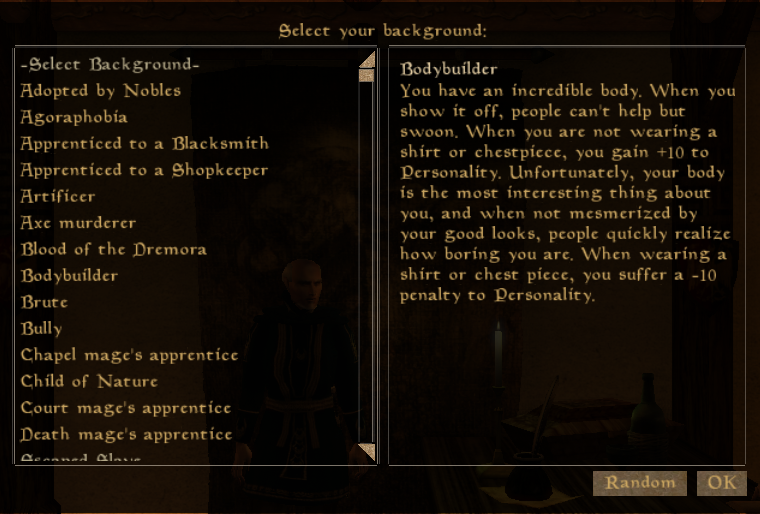 The Nordic Pantheon is quite interesting, prominent deities include Shor (Nordic version of Lorkhan), Kyne (Shor's widow, goddess of the Storm, Nordic version of Kynareth), and the All-Maker, especially worshipped on Solstheim.

"Oneness" with the land is considered crucial to pleasing the All-Maker. The Skaal practice this concept by seeking harmony with their surroundings. For example, firewood is collected from dead trees. Hunting is for subsistence, not sport. The sanctity of life demands that violence only be used as a last resort. The Skaal draw power from the natural order (the harmony, or balance, of the land); when they are in harmony with the land, they are joined with it through the grace of the All-Maker, and when this harmony is upset, so is the All-Maker, and their power dwindles.
It's believed the All-Maker cursed ancient warriors with undeath for committing acts of cannibalism, thus creating the draugr. Another legend says that when the All-Maker breathed life into the creatures of the land, his "Breath" blew through the trees as well. Some of these trees kept a part of this life, creating the spriggans. In times of great need, the Skaal perform a ritualistic hunt of blessing and cleansing that they call the Ristaag in order to demonstrate their gratitude to, and hopefully please, the All-Maker. They also practice the Ritual of the Gifts, a pilgrimage to perform certain rituals at each of the All-Maker Stones to restore Oneness with the land. Skaal often accredit the All-Maker with greater wisdom and power than deities which are part of polytheistic traditions. Extract from UESP

As with previous characters, you can install MTR's By the Divines to pick a deity and receive a power.

Note: both Blood and Gore and Combat Advanced are older, heavily scripted mods, right at the top of my MWSE/LUA-remake wishlist. I recommend you use them on a reasonably modded install.

Once again, my article with in-depth compatison of major needs mods.

- [The White Wolf of Lokken](http://lovkullen.net/Emma/lokken.htm), a large quest mode by Emma. You can either get the TSTSP patch linked above, or grab [RandomPal's overhaul](https://www.nexusmods.com/morrowind/mods/48862) - [The Neverhalls](http://download.fliggerty.com/download-118-504), a large dungeon of the Ancient Falmer. Again, get the patch for TORSP.