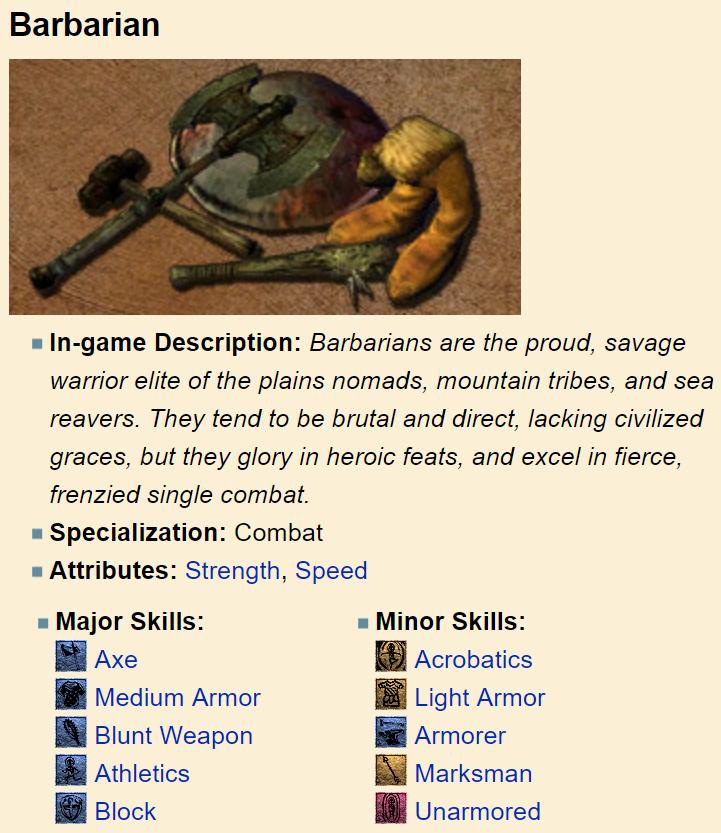 Come to think of it, I have never played a Barbarian. I tend to find pure melee classes less interesting, so I'm looking forward to what this will turn out to be!

Main attributes for the Barbarian: Strength and Speed; looking at the skills: Strength, obviously, but also Agility, and to a lesser extent Speed. That's good news, espcially when wearing Medium Armor: Strength and Endurance will increase nicely (maximum health) as well as Agility (hit chance and dodge).

Typically, Orcs and Nords are associated with the Barbarian Class, and for good reason, they are the strongest! However, take one look at their Agility… it is appallingly disappointing, making Light Armour, Block, and Marksman your go-to skills to improve Agility: not your prime choice for those races. The real brave choice here, it to forget about Agility and build up your health and defense... and take the damage like a real man, or mer.

To pick a race, you'll need to decide what kind of Barbarian you want to be.
If you lean towards the brute with no armour and a heavy weapon (a.k.a Conan). Go Nord, you'll have the Strength, no need for Agility, and decent Speed. The Orc has lower Speed and worse Unarmoured, but their skills align better with those of a Barbarian.

I'll admit, I like the male Argonian for a Barbarian. Hear me out. While not your stereotypical Conan the Barbarian, the Argonian is mostly tribal and uses the resources of the land to make weapons and armour (hence the variety of weapon and armour skills). Looking at the attributes, Argonians score an even 40 for Strength, Agility, and Speed. Taking that into account, Medium Armour and Unarmoured are a good match. Additionally, poison and disease resistances match well with a Barbarian who is used to living in harsh conditions.

Remember Gar the Human in Arcanum? This orc-dumb-looking melee fighter is in fact educated and very well-versed in politics and... tea! From a role-playing point of view, I like the smart, literate Barbarian. Could be a fun character to play.

Don't like any of the races? Consider Westly's Half-Troll Race – it has Barbarian written all over it.

As for Birthsigns, the Warrior is a fine choice, though, the Thief is particularly nice if you go for the unarmoured Barbarian. The Lord also has its place, especially with a Nord, making you highly resistant to frost but very vulnerable to fire. 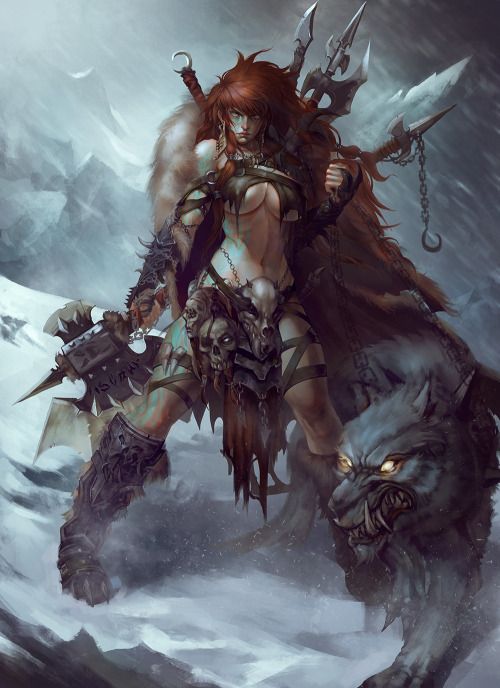 Conan/Berserker style, get your loincloth and prepare to show that chest: 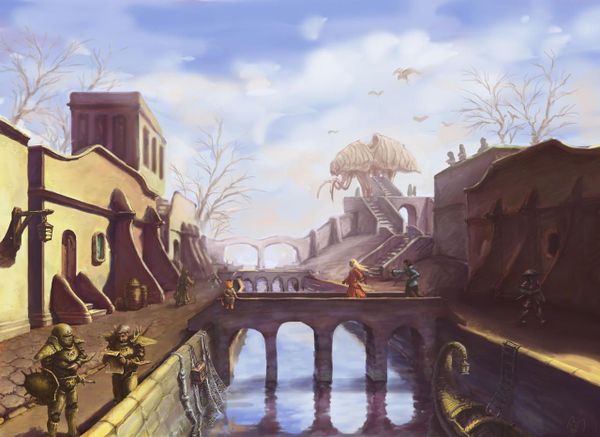 How long have you been modding and what was your first complete mod?I think I started 6 years ago or so. I had found the infamous “pastebin Morrowind modding guide” and discovered so many great mods. When I realized I couldn’t use ALL OF THEM together, I started

What?Games are randomly selected.2 lives per game.Games cannot be played for more than an hour.Lives carry over from one game to the next.When and how longMay 21st from 08:00 GMT3 to 12 hours depending on the cards played / septims redeemed.Cards?I have a

How long have you been modding and what was your first complete mod?  I think I started in 2004. I'm not sure about the 1st published mod between Tempus Fugit Ring and Where Are All Birds Going? Both of them could have been published in 2004-09. How do you approach