As you may know, I am currently reviewing Morrowind mods that add NPCs to the game: citizens to populate cities, bandits on the roads and companions to survive said roads.
Not completely pleased with any of the options, I decided to try and make my own bandit mod. My main focus was simplicity, immersion, and balance.

The loot - weapons and armour

I loved the fact that in the Hostiles you could get all kinds of loot but I didn't like how repetitive and generous it was.

Things I kept in mind:

To achieve that, I first built my levelled item lists, for each type of equipment I made 4 lists: cheap, cheap enchanted, best, and best enchanted where anything worth more than 500 was considered best and the odds to get any enchanted item or best item was 1% or 2%.
I put these 4 lists into 1 to set the player level.
All I needed to do then, was to give my bandits this last leveled item (assuming they have the skill for it). 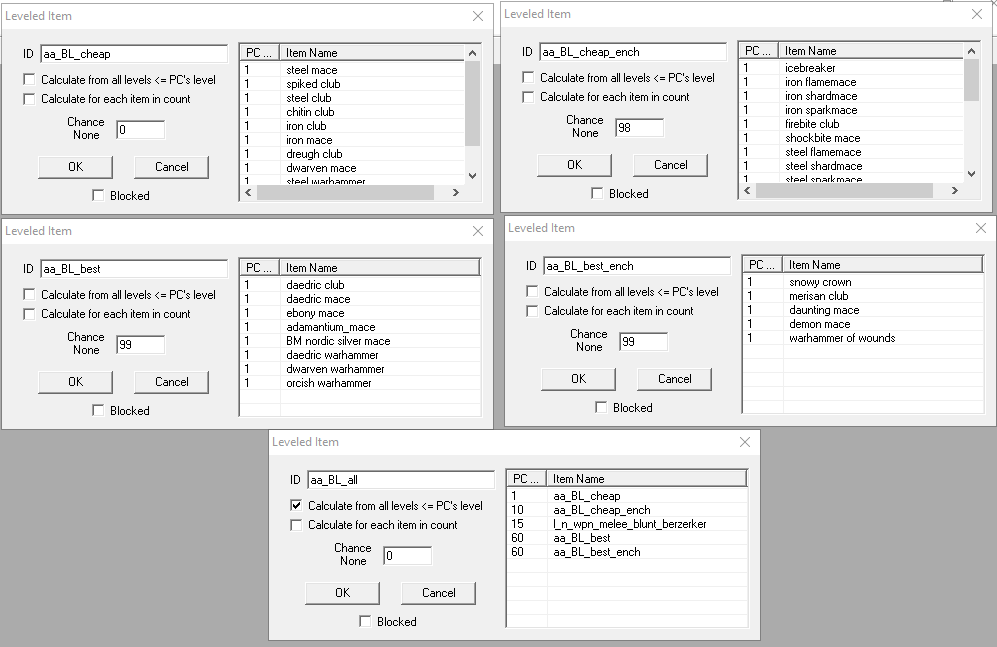 What this means for my characer looting an outlaw:

Rince and repeat for every type of weapon, every piece of armour.

Looking at the skills, I made a list of items one could possess and set the chance to 50%. This way, defeating an outlaw skilled in security, you could get a lockpick or a probe.
When possible, I made a list for classes as well, so defeating a bard, you would have a 50% chance to get a lute or a book (they are lore masters, after all), for example.
I also created a random levelled list, still with 50% chance to account for the fact that some outlaws might have some food, a potion, a scroll, stolen items from previous victims, etc. 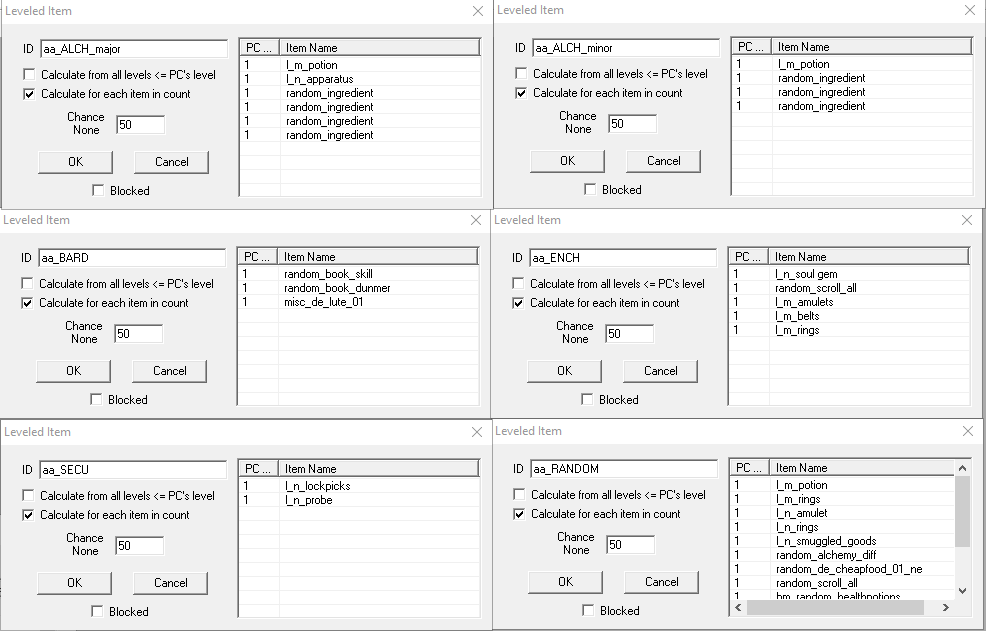 One of the things I minded the most with the Hostiles was the fact that I would fight the strangest hostiles: a savant teamed up with a healer and a crusader (they all lost their way, I guess) or a necromancer with a priest.
When creating my NPCs, here are the things I kept in mind:

Some support classes, such as healers and alchemists were added, to vary the loot and the looks.

While filling the inventories of my outlaws, I was careful to give out roughly an equal amount of heavy, light and medium armour. I did the same for weapon types so that the loot would be interesting for every player class. I also decided (randomly) that the nightblade would have bracers but no cuirass, the warrior a full set, the thief greaves but no boots, etc) to reduce the amount of loot. 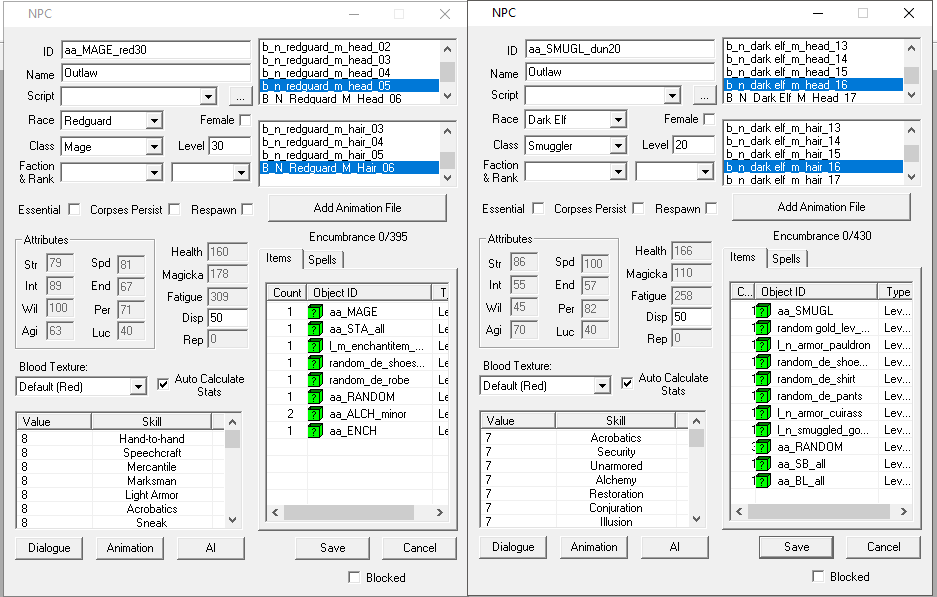 Based on their skills and class, they would get more random loot, more ingredients (still with a 50% chance to get nothing).

These outlaws have a 50% chance to spawn in groups of 1 to 4.
They are in front of bandit/smuggler/slaver hideouts.
Their level is lower than the player's (-5 levels).

Originally, I used the same NPCs for groups and solo attackers, the only difference being their level.

Soon after the release (and after playing around with CM Partners that adds lone bandits) I decided that my lone outlaws should sometimes demand your gold for your life rather than attack you outright.
The way this is done is via a script and dialogue.
The script needs to be attached to the NPCs, so unless I wanted ALL my outlaws to ask for money, I had to create a separate set of NPCs.
Here are the choices I made: 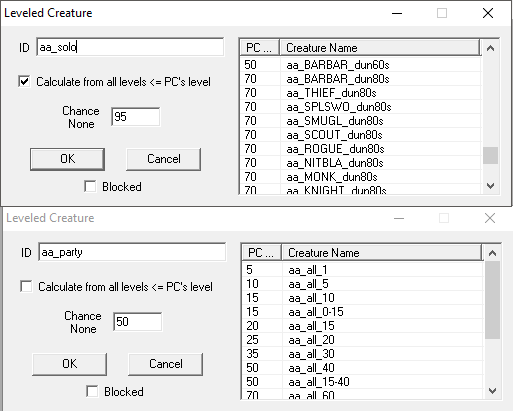 The muggers and pick-pockets

Using Antares' mod as a template, I then added muggers in corners of cities and pickpockets in towns and shops.
All I did was:

I also made sure Antares' original mods were compatible with mine.

For the TR addons I have

When all is done, tested and tested again, I would really like to have an in-game configuration menu, much like MCA to enable/disable muggers, pick-pockets and top-tier gear.

For now, I'd better get back to my TR addons.

EDIT: Well guess what both the TR addon and the configuration script are done! Now to play the mod some more and wait for bug reports if any!

But seriously, what else?

There were talks of adding ambushes (you see a lone highwayman, think you can handle him but he add accomplices hiding nearby)
I was toying with the idea of adding slavers that would capture you, lock you up or sell you... IT NEVER ENDS!