At long last, a mod I made just because I wanted to make it!
The inspiration was obviously Magic The Gathering, even though I never collected the cards myself, I've enjoyed the games with friends and later on the PC game (1997)
Morrowind is where I get to unleash my inner-pack rat and collector, so it only made sense that I put the 2 together.
By then, I had learnt to modify meshes and give them a different texture, I also knew who to create dialogues with multiple choice, but MTC was going to be a whole new level.
To make the card, I used the screenshots of creatures from UESP, I also used the descriptions for the card albums.
Adding the cards to traders and levelled lists was fairly easy though I started a game countless times to make sure it was balanced enough.
It took some fiddling, tweaking, merging and gluing scripts to get the cards sorted and displayed. At the time, Aurel wasn't there to check/fix my scripts, so I felt it was quite an achievement. 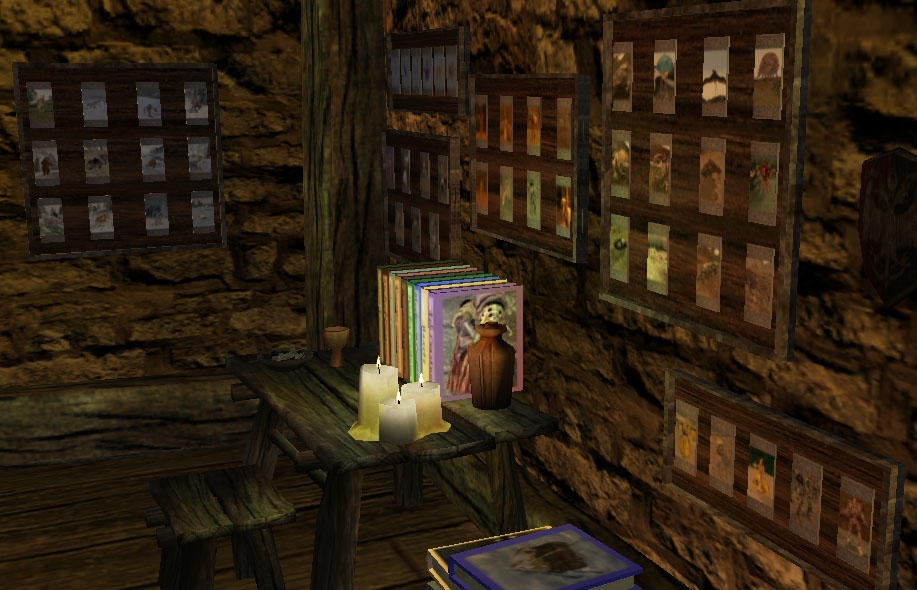 I was also pleased with the artsy book covers, nothing to be proud of though, I just applied the oil painting filter...
The dialogues were quite a nightmare. Imagine this: When you talk to a collector, there are 12 different outcomes (one for each type of card). For each of these, as many outcomes as there are creatures in the selected type (between 5 and 12). For each of these many, many, many outcomes, 2 more outcomes suggesting to trade 2 different cards. Phew!
There are many typos in there, honest mistakes a well, but nothing will make me go back to this maze of dialogues. Unless OpenMWCS has a nice clear layout for dialogues: I hate the dialogue window in the CS and the fact that the font is so desperately tiny.

Extract the content of the compressed file in your Data files folder.
Activate AND load first:

The cards collectors (see list below) have a small script, any mod giving them another script will prevent them from trading cards, but not prevent you from collecting ;)
The script of one of the crystals (Act_Crystal_02_Pulse, script: Sound-crystal-ringing) has been swapped with a new one that allows the player to harvest cards/crystals