About time I took a serious look at Morrowind Rebirth!
This massive mod has been worked on by Trancemaster for years. It started out as a separate city overhaul and ended up the everything overhaul it is today.
If you want to read more on Morrowind Rebirth, check out this recently published article on PC Gamer.
There's also this recent showcase from DarkElfGuy:

One of the major issues with Morrowind Rebirth for someone like me, who plays with MANY mods, is that Morrowind Rebirth tends to not be compatible with, well, most things.
Here's a brief compatibility guide from the mod's page:

Morrowind Rebirth is a huge modification and will not work well with a lot of other mods, especially mods that make changes to the landscape or add new buildings.

The reasons for that are:

With that in mind, I looked for mods that I would enjoy, of course, but also mods that I don't have on my permadeath modlist. Here's the result
I went overboard with new creatures (Neo's creatures, Giants, Piratelord's creature) and even replaced a few models (Westly's new golden saint, corprus stalkers and Winged twilights) and new ingredients (Sri Alchemy, pearls, gems and ingredients from Abot's and Piratelord's mods) . Added my must have replacers (face, bodies, BB armour and clothes) though I went for an old classic: Riptides replacer that mostly used better heads. (I will let you know how I cope with better heads, not sure I'll still like them.)
I fancied a different sound/music experience so I picked Piratelord's expanded sounds as well as Mr. Swivellers sounds. I have kept the original magic sounds so that Elemental Magic could work properly. I have removed ALL music form the game.
Naturally, my favourite MWSE/Lua mods are there.
As far as NPC additions are concerned, I'm using Outlaws and added a couple of companions mods: Jasmine, Yshga and Comes-By-Road.
I almost forgot, this modlist has Morrowind xp and all the levelled lists have been delevelled.
Check out the full list for details (with descriptions and links).

Finally, I needed a new character.
I really considered using some of my failed level 1 characters from permadeath (Cirrean, my angsty evil teen Bosmer!) but decided against it and instead, made a list of traits (more or less inspired from the handicaps and goals we use in permadeath) and created a poll. My new character will use the top 3 traits. Go ahead, cast your votes, there is still time! 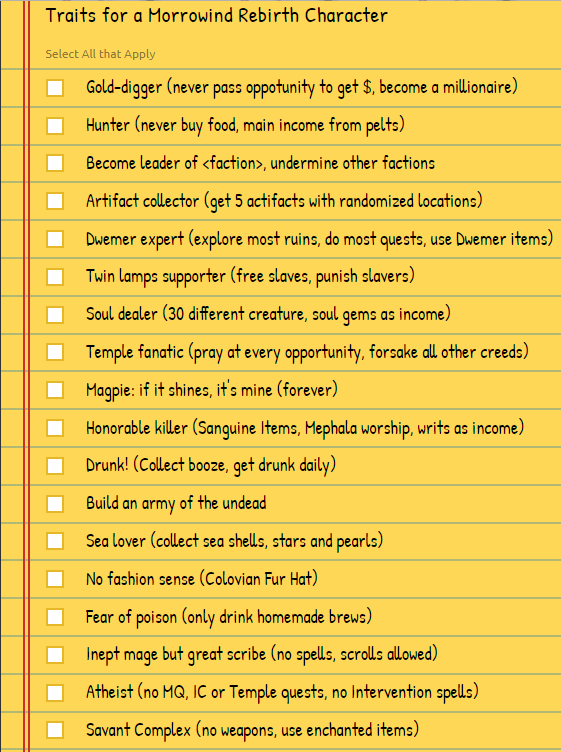 Before I can play, I still need to check my modlist for conflicts, I've moved Morrowind Rebith - main.esp right at the bottom before the merged esp. This way, nothing will overwrite the land edit from Morrowind Rebirth. I've moved all gear modifying mods right below Rebirth main esp (essentially choosing my pretty armour over the re-balanced stats -- I AM shallow, you knew that). I've modified Pearls and Pirates to remove land tears as well as Jasmine so her house doesn't float anymore. No doubt there will be more.

UPDATE:
The results of the poll are

During on of my livestreams on twitch we created the following character:

We started of in Seyda Neen and got stuck there for a while, not so much because we had so many things to do, no, but because thanks to Abot's delever, we were surrounded by high level enemies (some in the Bitter coast, some in the bandit cave, some on the way to Pelagiad and even some in town. Fun times.